My pretty new deck. (Now I don’t have to get Jack to boost me into the house by my butt).

It took a week, a flat of beer, multiple trips to the hardware store, and a couple of bro-mance phone calls to my brother, but Jack has built us a new deck BY HIMSELF. I’m not sure if he can say it was completely a solo mission because I did fetch beer, cheese, pepperoni sticks, and sandwiches for my husband while he worked in the hot sun for hours on end. Being Lady Leisure, I often offered words of encouragement like, “what’s taking you so long?” and “that doesn’t look right”. I also candidly photographed his progress to share with all of you.

I made sure I took pictures of all the f-ups and Macguivers because this is just what I do.

Perhaps out of pity or in a drunken stupor my brother (who should be on the show “Brojects”) gave his official seal of approval on the deck. But there is a possibility that Jack did a good job and he should be upgraded to “Jack of ALL Trades”. Of course, I’m not ready for that.

It was around this point where Jack realized he couldn’t rip 1″ off a board, so he took to re-spacing ALL the boards.

Safety First! After much deliberation on whether the railing should be an innie or an outie, Jack finally decided on the latter.

Measure once, cut 3 times. Jack is cursing his decision to do an outside railing.

Lady Leisure “helping” by entertaining herself while her husband builds the deck alone. 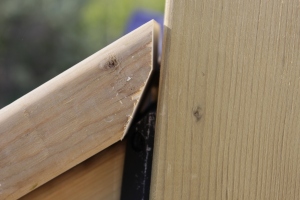 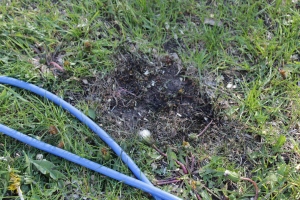 The burnt spot on the lawn from when Jack used a frayed extension cord for his tools and it caught on fire.