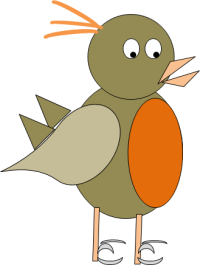 The robin that repeatedly knocks himself silly on our window. ON PURPOSE.

We have a new friend. His name is Annoying F’ing Robin. Each morning and evening (at the crack of dawn and prior to sunset), Annoying F’ing Robin struts up to the basement window well and stares deeply into his own eyes through the reflection of the window. He then proceeds to either peck the SHIT out of the window or fly into it over and over, and OVER again.

When Jack first alerted me of the bird’s presence, I momentarily worried his paranoia had escalated. After a discussion about mental illness and sleep deprivation, even Jack could not confirm the bird existed. This comes from the guy who made me second guess myself on our mother-f’ing HONEYMOON after I was absolutely certain someone had stolen my earrings from our room. He then forced me to report the stolen property to the front desk who assured me they would be tearing our room a new a-hole to look for $18 fake diamond earrings whose disappearance was faked by yours truly -because I want the poor housekeeping staff to get their asses fired. Shut up.

The bird is real, but Jack deserved to second guess himself for the earring incident.

Maybe the bird is bad ass and wants to prove his strength to all the women. Or maybe Annoying F’ing Robin lost his sanity in a window accident and has never recovered. He needs to stop replaying that fateful day in his mind (and in real life) before Jack gets a cat to remedy the problem. And we all know if Jack gets a cat – Jack spends the weekend in the dog house. And if Jack does what he REALLY wants to do with the bird, our neighborhood will be up in arms (or without them) because most people just don’t identify with rednecks.

So my friend, Robin:
Stop being you.

Stop fighting your reflection – you will not win.

And most importantly, stop shitting in my flower beds.