Like a fine wine or the whiskey that shares his name, Jack gets better with age. As his beard grows longer and more fruitful, he adds to his trades and becomes handier. It is tough to fathom how his projects have such positive outcomes when he never plans and only measures half the time. I’m not necessarily talking about quality of workmanship, but he has a hell of an imagination, will get the job done faster than anyone I know, and is not afraid to spend a few more minutes hiding flaws and presenting his masterpiece as though it were professionally crafted.

Our detached garage seems to be stuck in a sink hole and last spring it was floating. To remedy the problem, Jack dug a small ditch last summer and installed eaves troughs on our garage a few weeks ago. Originally the eaves troughs were laid on the ground to catch the water, and a guidepost (that was in his truck from work) was attached to the end of the trough as an extension. Eventually, he installed the system properly, but I bet if I paid the garage a visit I would notice another impressive “McGuiver “ situation.
Jack is a solution man. I have been troubled by the logistics behind showcasing a piece of barn wood wedding artwork that Put-Put gave us for Christmas. I am lucky that Jack was feeling particularly crafty the other day, because not only did he throw together an easel for me, but he successfully solved my seating chart predicament.

How To Build An Easel
by Jack of Most Trades

As much as I joke, I was impressed with Jack’s throw together project this time. See?

(Note: he did not make the sign; he’s not THAT crafty) 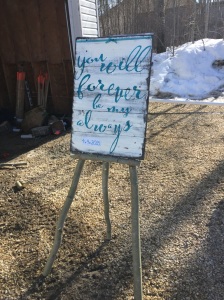 Pretty! If you look closely, you can see the eaves trough in the background.

2 thoughts on “How to Build An Easel”