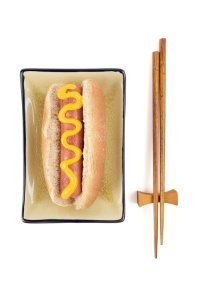 How to eat a Corn Dog

This summer was fun. Jack and I were on a break which was horrible, but if you like rollercoaster rides, it could be defined as “fun”. Unlike most people who break up, Jack and I still hung out as friends, and rustled up a few more stories than we would have if we were “together”. At one point we were telling complete strangers we were cousins. They believed us until we had a few too many beverages and started hugging a lot.

You should know by now that we are good friends with my brother and his lady friend. Normally, we go over to their mansion, sip on classy cocktails, and watch 3-D movies, but one lovely day this summer we decided to venture out to the City Fair (carnival, festival). We didn’t go for the rides, the food, drinks, or exhibition; we went for the people watching. And they did not disappoint.

After zigging and zagging through the herd (herd? Read this.) for far too long, we grabbed a cola and a seat beside the sling shot ride. To make the carnival experience more bearable, my brother brought along a couple of vodka minis. We sat and enjoyed the ride. So now that I’ve set the stage for a pre-teen play date, stay with me.

We played a few games, Jack won me a giraffe (paid $10 for it), and we worked up a healthy appetite for disgusting carnival food. Of course Jack ordered the gigantic corn dog before thinking of the repercussions.

Enter the one foot long corn dog with dripping mustard. The problem was one that man has been facing for decades; an issue that comes up when contemplating the consumption of bananas, popsicles, and any other meat on a stick.

“Good question. I can have the first bite if it makes you feel better.”

Here’s a grown man frozen in fear, being careful not to look anyone in the eye for too long while coming up with a plan to attack his dinner.

Solution: Lean forward (to ensure mustard lands on ground), turn corn dog horizontally, and eat like corn on the cob.

Meanwhile, a desperate grandmother rushed her young granddaughter, obviously freshly introduced to potty-training, to the shelter of the hotdog stand. My eyes widened and Jack turned around just in time to hear the toddler toot and pull up her knickers. With grass and trees only 5 feet away, I both wonder and worry what it will be like to have a child that has to go right here right NOW. I would like to think I would be proactive in the matter, but I guess when you gotta go, you gotta go.

I was laughing so hard I dropped my sweatshirt in Jack’s pool of mustard. Corn dogs are no longer my forte.